Often, grandfather clocks are a family heirloom, representing fond family memories, and we understand how much they mean to our customers. We repair all makes and models of grandfather clocks such as Howard Miller, Ridgeway, Kieninger and Hermle. If your grandfather clock has “Tempus Fugit” embossed on the dials, as many do, this is Latin for “time flies” and is not an indication of the brand, make, model or value.

Grandfather clocks are very complex and require a specific skill set. There are nuances and settings such as nighttime silent or multiple chimes, that only professionals should be trusted to maneuver. Expertise in grandfather clocks is rare and it’s important your grandfather clock be in the best hands. 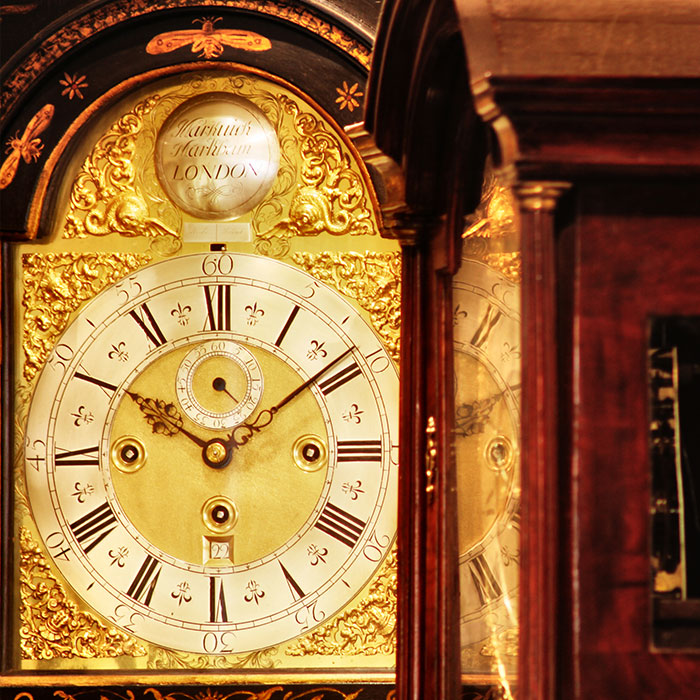 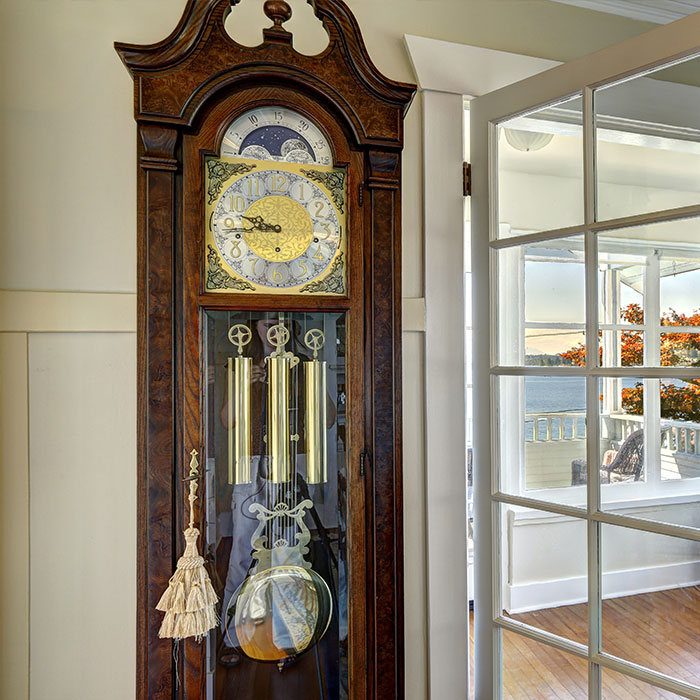 In 1656, a Dutchman by the name of Christian Huygens had the idea to use a weighted pendulum to drive clocks. Unfortunately, his original designs left something to be desired, as the potential of a pendulum as a timekeeping element was undermined by its own tendency to be slightly inaccurate.

This inaccuracy was due to the face that long pendulums, which were more accurate than short ones, and also inflicted less wear on the clock’s inner workings due to slower swing speeds, would swing too wide to be cased neatly inside of a wooden clock.

This meant that shorter pendulums would have to be used, requiring more frequent windings and also reducing the accuracy with which clock owners could depend on their clocks.

Luckily, about 15 years later an ‘anchor escapement’ was developed by England’s own Robert Hook that could be used in conjunction with the pendulum to keep more accurate time. The escapement helped t limit the necessary swing of a long pendulum to just a few degrees, which allowed it to fit into the tall, narrow housings we know today. At this point, what we know and recognize as the grandfather clock was officially born.

Over time, more and more of the characteristics we associate with grandfather clocks were born. The characteristic white face, for example, wasn’t introduced until 1772 by a company from Birmingham. Like other elements of the ornate grandfather clocks we know today, these clocks began as quite simple affairs, where elements were meant to be practical rather than pretty to look at.

In time, however, clocks created for those of higher status quickly came to bear intricate designs in their wooden casings. Additionally, the white dial came to house pictures and illustrations, such as birds, flowers, and other often nature-themed imagery.

At the time, these clocks rose to prominence as the most accurate time keeping devices available, and quickly became known as the standard in homes and especially in professional business settings. Originally, these clocks were generally available in one of two configurations, the eight day or the one day (more accurately, 30 hours) setups. The former had to be wound just once per week, but was generally more expensive, while the latter required winding every single day to keep running.

Originally, grandfather clocks were known simply as ‘long-case clocks’, a name that has significantly less character but perhaps more descriptive power than the one we use today.

The name Grandfather Clock was actually not popularized until the 1870’s. American songwriter Henry Clay Work found himself in England for a visit, and was booked to stay at the George Hotel in Yorkshire.

Upon entering the lobby of the hotel, he noticed a click that wasn’t actually running and asked the hotel staff why they kept it around, or at least why they hadn’t had it fixed. The staff told Work a story about how the hotel’s founders’ deaths seemed to coincide with the decline of the clock. When the first brother died, the clock began to lose time, when the second brother died, it stopped completely.

Whatever the truth of the matter, Work took a fancy to the story and wrote a song about it, called ‘My Grandfather’s Clock.’